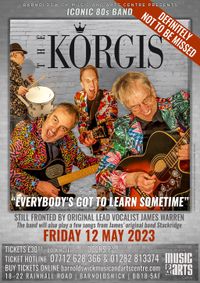 The Korgis 40th Anniversary of The Best Of

For the benefit of Mr Kite there will be a show tonight And it's gonna be The Best of The Korgis - 40th anniversary 1983 - 2023 Marking the 40th Anniversary of the Collective Best of Album.

Original founder/Songwriter and Lead Vocalist James Warren with his loyal pack of Korgis will be hitting the road with shows in 2023 celebrating 40 years since The Best of Album was released.

James John and Al will be Up Close and Personal and performing a songs and stories set, based on their memories of Stackridge, Tears for Fears, Peter Gabriel, Bonnie Tyler and of course The Korgis

The band will perform the A's and some of the B sides of the singles along with songs that inspired them to be musicians in the first place.

James will also delve further back in his career and pull a few rabbits out of the Stackridge Hat, before coming right up to date with last years 'Kartoon World' - which has been universally acclaimed as a career high.