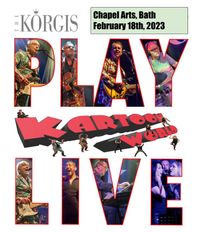 The Korgis - The Last Ever Performance of Kartoon World Complete

Way back in the Post-Covid world of 2021, gigs were considered a risky thing and the whole music biz was limping back to its feet. The Korgis had just released a new concept album and were itching to play it live. We only played two performances of the album in its entirety, as we didn’t want to subject the audience to a sea of new material.

A year down the line and it seems ‘every man and his dog’ owns a copy of ‘Kartoon World’ and the requests have been coming in to perform it as it was meant to be. With an album of odds and sods about to be released (Kool Hits, Kuriosities & Kollaborations) and an album of completely new material well underway, we felt we should present it one more time in its complete multi-media form.

The Korgis will of course we be playing all the classics in this special extended show.

Trying to keep the show fresh has meant the re-recording of such classics as ‘Don’t Look Back’ and the very first Korgis demo ‘Lines’. The old and the new sit seamlessly side by side because the band’s philosophy has always been, Peace, Love, Togetherness, and that has not changed.

We would love you to join us as we say goodbye to Kartoon World (in its complete form) and move to pastures new, but we didn’t feel we could leave it, without one more grand gesture!